Winter is here and that means potentially cold houses and cold bathrooms. There’s nothing worse than stepping out of nice hot shower into a cold room and putting on a cold robe or clothes! This is where towel warmers come in and there are lots of different types with different features and different price tags.

When you think of towel warmers you are probably visualising the towel warmer racks that are common in many homes. They can be mounted on the wall or even free-standing.

The Brookstone Towel Warmer is one of the different takes on towel warmers, using a bucket-like design to quickly warm your towels, robes or any other clothing that you want heated.

This review looks at the interesting features and advantages you get with the Brookstone towel warmer, and how these differ from towel warmer racks,  as well as from some of the other towel warmer products on the market.

Overall, there are a few key features to consider when making these comparisons:

>>In a rush? Visit Amazon to read user reviews and purchase a Brookstone Towel Warmer.<<

So obviously the basic design of these products are very different. The Brookstone towel warmer is a bucket-like cylindrical container that is used to heat up the towels and clothing within it. And towel warmer racks are open racks where you can hang different articles of clothing or towels.

So let’s compare these two types of towel warmers.

People like the Brookstone Towel Warmer because it allows you to quickly and heat up your towels. That means you can take a quick shower and be confident you will have some warm and toasty towels or robes ready for you.

Timers, speed and other settings

The Brookstone towel warmer warms the towels to 120 degrees in about ten minutes.

There used to be only one setting, but there are now 4 options for the timing – 15, 30, 45 or 60 minutes. The temperature setting stays the same, although its stays warmer for longer and generally heats up more at longer timings.

It features an auto shutoff feature for safety. It plugs into a standard 120V AC outlet, so it doesn’t require any special wiring or converter.

The towel warmer is large enough to accommodate up to two extra large towels. It is suitable for more than just towels though,  as it can also be used to warm up socks, gloves, scarves, small items of clothing, light blankets and robes.

It does look good, but is slightly large so can’t be tucked away under sinks like some smaller towel warmer cabinets. The base is 12” in diameter so it doesn’t take up too much floor space, but it is quite tall at 22”.

They made some recent improvements to its design, replacing the chrome bottom with bamboo ‘feet’ and giving it a natural color. It does have a cozy, spa-like feel to it.

As with any heating product there is an element of risk if you are not careful. The inside material that is used to heat the towels gets quite hot, so when you are reaching in the bucket to remove the towels after using it, be careful not to touch the inside of the bucket. This is a common complaint you will read about in reviews. There is however, a hot surface warning light which stays on as long as the surface is still hot. This turns off when the towel warmer has cooled off.

As a safety mechanism you cannot reheat your towels until it has cooled off and the hot surface caution light has been turned off.

Brookstone isn’t the only bucket-type towel warmer out there, although it is probably the most popular. A lot of the benefits are similar in that they work overall in the same way. But let’s have a look at some of the details.

The Haven towel warmer looks similar and works in the same way. It is slightly different in size (about 1 inch shorter and 1 inch wider in circumference). It also accommodates up to 2 towels so it’s about the same size. It seems to come in a few different colors. The design of the Haven towel warmer isn’t as good, and it doesn’t look as nice. It is however is cheaper than the Brookstone Towel warmer at under $200.

Read more about the Haven towel warmer on Amazon.

So on Amazon there is another product called Towel Warmer Bucket by a manufacturer called Towel Warmer Bucket. Very creative! Some of the features sound exactly like the Brookstone towel warmer (down to the four timer settings) and it even looks the same, down to the bamboo feet. It seems almost like a knock-off of the Brookstone towel warmer, but it is cheaper. The reviews are ok and it is labelled as an ‘Amazon’s choice’.

Read more about the Towel warmer bucket on Amazon.

Ok these aren’t exactly bucket-type towel warmers but I thought I would include these, as they are similar in some ways, and different in others. These towel warmer cabinets also keep towels warm in an enclosed space. They heat up equally quickly, shut off automatically, and generally also fit up to 2 large towels.

Their design is slightly different as a sort of box as opposed to the upright bucket-type design. They are generally lighter at around 8 pounds (bucket type towel warmers are around 12 pounds) and because of their design might have a bit more flexibility in terms of where you can place them (like perhaps under a sink) and being able to move them around.

There might be less risk of getting burned since you don’t have to reach down into a narrow cylinder.

A couple of popular brands on Amazon are TowelSpa and Pollenex.

How to use the Brookstone Towel Warmer

That’s it – when it’s ready, you can take out the towels.

Watch this video to see the process. The video is of the old model, but you will get the idea.

Brookstone is a trusted and well known company that makes a wide range of different products all designed to improve and enhance the home experience. They make products as varied as sand boxes for children, wine openers, and, of course, the towel warmer that is the focus of this review. The company is trusted and reputable and known for making high end products that stand the test of time and don’t break the bank in the process.

You can read reviews and purchase a Brookstone Towel Warmer on Amazon. 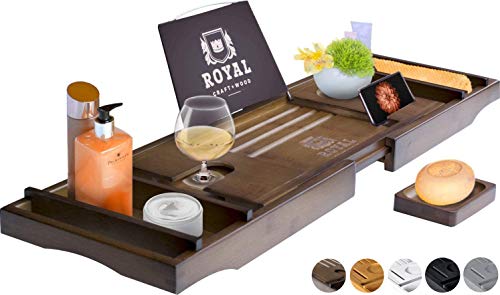